This is a reposting of an article I originally wrote for the Mox Boaring House website.

How to use tarot or playing cards to generate “standard” RPG ability scores.

Dungeons and Dragons has long used random dice rolls for determining ability scores, with many available variations on how the process used to determine scores. In my time Dungeon Mastering a D&D 3rd edition game, I encountered the classic problem of having one character with really good scores and one with borderline passable scores, and the troubles that imbalance caused for encounter balance. Years later I started up a new game, but instead of using point buy, standard array, or dice rolling, I made up this new method using a deck of tarot cards.

This is an alternate system for determining 6 ability scores, ranged 3-18, as is common in D&D and similar games. The trick in this system is the use of cards, typically playing cards or tarot cards, in the place of dice rolls. It is intended to provide some balance between all the players, much like point buy or standard array methods, while still involving a bit of randomness, much like rolling for ability scores. This card based system is very flexible; there are a lot of “dials” that can be adjusted, such as altering the deck or changing the drawing setup, that can increase player control or randomness, and alter the power level of the characters.

I’m going to start this article using playing cards for the examples, as it’s a simple and direct way to describe the mechanics, and player cards are more readily accessible.  However, the system really comes into its own when done with tarot style cards, as it can be used for a reading and foretelling of the character while generating the ability scores.  I’ll cover the use of tarot cards at the end of the article.

Cards Instead of Dice 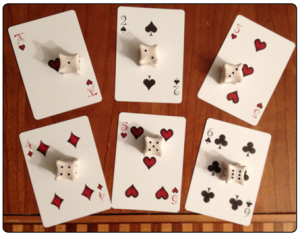 There have been a few game systems in the past that have used card mechanics for character generation, not the least of which was old school poker-themed Deadlands, but those systems tend to compare the drawn cards of a full deck to a chart to translate into standard ability scores, resulting in a random set of stats that suffer from similar balancing problems as random dice rolls. Some people have high stats, some people get low stats, and most people get average stats. It’s not really an improvement over dice rolling, and I’m also not a fan of needing a chart to build a character’s attributes.

In this system we’re actually using the value of the cards, specifically a subset of the cards instead of a full deck, to replace the dice in a die rolling system: Players draw a card for each d6 they would roll and use the value on the card, a 1-6, as if it was the value of the die rolled.  The important part here is that all the players use the same subset of cards, and they will be using all the cards in that subset, but drawn in a different order. The resulting scores will be similar to dice rolling, but as if all the players rolled the same set of numbers but in a different order.

Mechanically this has a three main advantages.  First, everyone has the same set of “rolls” so their stats are going to be similar in power, but still different from each other.  Second, the GM can stack the deck to control the power level of the game, allowing for low, mid, or high powered ability scores for everyone but without requiring point buy or standard array.  Lastly, the system for drawing the cards can be modified to increase or decrease the randomness depending on preference.

Setting-up The Deck For Your Game

To use this system you’re going to want a set of numbered & suited cards. I recommend a standard Rider-Waite-Smith tarot deck or your basic set of poker playing cards, but you don’t want all the cards in those decks.  You can’t roll a 10 on a 6 sided die, so for most games you only need 18 cards, all between Ace (counting as 1 not 11) and 6 in value. As a GM, which combination of cards you put in the deck controls how powerful and min-maxed the characters can get.  Including a lot of high and low cards, but not many middle value cards, will encourage min-maxing, with characters having the option to create very high and low scores.  Including very few low value cards decrease the ability to make a dump stats.  The more 6s are in the deck, the more likely it is someone will draw the cards for an 18 ability score.  It’s actually possible to build in a lot of control of the final scores by altering the starting deck, but doing so in no way complicates the actions of the players generating their scores. 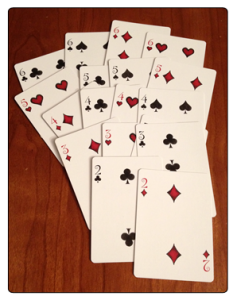 Here are some pre-generated deck builds for a few common 3d6 ability score games, based on the standard array scores for those games:

This is my default method for performing a drawing. It is a middle ground between a fully random set of numbers and a completely player determined system.  Players have some control over how the cards are laid out, but there is a random element that means players won’t necessarily get that 18 ability score without some luck. It’s my preferred system, and I’ve used it successfully with players in the past.

Aside from simply adjusting the cards in the deck to control power level, there are a few variants you can do with the drawing system to increase control or randomness.

If you really want to up the randomness, don’t let the players put the cards where they like.  Instead, have them layout the cards in 6 piles in the order they are drawn.  The only choice the players get is which ability the final scores go to.  This more random setup more closely resembles random dice rolling, but has the advantage that all players are still using the same deck and thus the same “rolls.”  You are more likely to get average ability scores this way, which may or may not be desired.

The reverse of the random option, in this setup the player puts down the first 6 cards to start, but can then place any card on any pile until they have 3 cards in each pile.  This system gives a higher degree of control to the player, but still has the slight random aspect from the initial 6 draws. This system increase min-maxing, which may or may not be desired.

The last option is to add more cards to the deck, bringing the count of cards up to at least 24 cards.  With a standard deck of playing cards, that’s actually all four suits of Ace through Six.  Shuffle the deck and have the player drawn out using any of the above methods until they have 4 cards on each pile, then drop the lowest card before totaling, similar to the “4d6 Drop the Lowest” ability score method.  Depending on where the cards end up, players are likely to have similar final card values but they may not be exactly alike. It’s likely that the players will drop aces in most cases. Unless you’re using tarot cards, see below, you will lose some control here because with all the ace-6 cards included you lose control over the deck’s composition. Using standard tarot cards, you get a few more cards to work with.  I should caution that I haven’t tried this method personally. 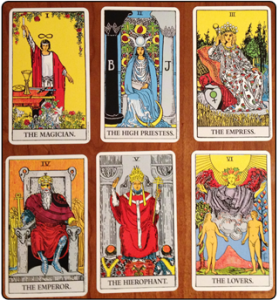 While playing cards are more common, I prefer to use tarot cards. The main advantage to using tarot cards is that it just feels cool, especially in fantasy themed games. In most modern fully illustrated tarot card decks, every card contains interesting and evocative imagery suitable for a fantasy game. You can even play it out as the not-yet-hero getting a fortune telling about their fate to come.  I highly recommend this for fantasy games like D&D as most tarot card sets fit a fantasy world theme easily.  If you’re willing to look around you can also find tarot card sets that fit any variety of other themes, but be careful as not all decks are alike when comes to the suits and values. Sets like the Pathfinder Harrow deck lack numerical values and sadly are not viable.

The second benefit to using tarot cards is that with a Rider-Waite-Smith type tarot deck you essentially gain a 5th suit of cards: The Major Arcana. This allows you to use a 5th card of value 1-6 when designing the ability score deck. In the Rider-Waite-Smith deck, the first 6 Major Arcana are particularly well suited to fantasy games: I – The Magician, II – The High Priestess,  III – The Empress,  IV – The Emperor,  V – The Hierophant, and  VI – The Lovers. Even if you aren’t using this “5th suit” to build your deck you can mix the 1-6 Major Arcana in, replacing standard suit cards, just for the effect of drawing Major Arcana instead of the basic suits. I encourage GMs to build decks with card values and imagery, in that order, they think works best.

Of course you don’t have to stop at a mock-reading.  If you have the time and inclination to do an actual reading, the cards can serve as an interesting way to help fill in backstory for the newly created characters, and layout some possible adventure hooks.

I recommend only using the top 6 cards, one from each pile, for the reading.  Attempting a reading of all 18 cards would be time consuming, and largely repetitive because each character draws the same 18 cards.  By only using the top 6 cards in each stack of 3, you can get a more unique and manageable set for each player.  Essentially draw out all the ability scores and then use only the top card in each pile for the reading, one for each ability score. 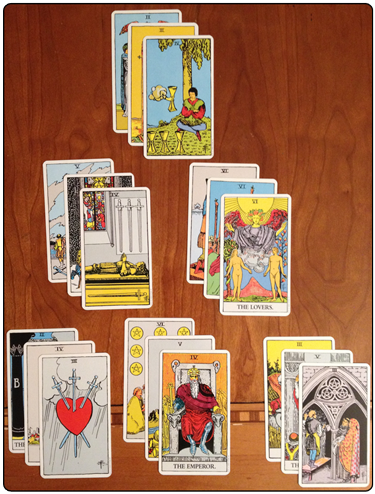 I recommend doing the drawing into a simple 1 / 2 / 3, pyramid shaped layout, or spread. Each step of the pyramid represents a time period: the past, present, and future.

As for the meanings of the drawn cards, you could use an established interpretation for each card, with many books or websites able to help you with that, but I’ve found for gaming you can just as easily make up a meaning based on the appearance of the card and the situation. Remember that a card drawn reversed, upside down, generally has an inverse or opposite meaning to it’s appearance, which can help expand the amount of interpretations you can get from a deck of 18 cards.  For example, drawing The Lovers major arcana inversed is likely a breakup, not a romance.

In the example drawing pictured, I might give the following interpretation:

Make It Your Own!

Like any good game mechanic, tinkering and customization is encouraged.  In particular, I’m interested to know if anyone has come up with any other RPGs that this system could work with.  I’m also always interested find out about playing cards sets or tarot decks with evocative artwork.  For example I know there are some great zombie themed decks out there that would be a good fit of a zombie themed game.  I’ve personally used my old Ravenloft Tarokka deck with this system in the past.

Please let me know what your thoughts, feedback, and recommendations are.

Brian Danford is a former cheesemonger currently living in Seattle.  He lives with an adorable redhead, two cats, and a surprisingly old turtle. His most recent gaming project is a Savage Worlds setting called Special Investigations: NightShift.

This article features artwork made with Public Domain Tarot Card images and Joe Vollan’s deck of playing cards, used with permission and available for purchase through Card Kingdom.